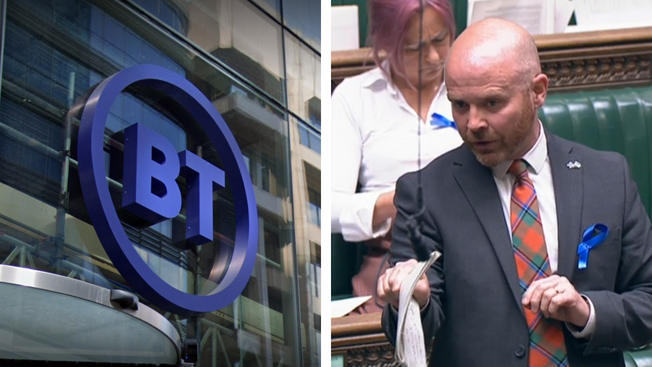 Local MP Martin Docherty-Hughes has called on bosses at BT Group to deliver a fair pay deal for workers following industrial action by 40,000 BT & Openreach staff in West Dunbartonshire and across the country.

SNP MP Martin Docherty-Hughes has written to BT Group CEO Philip Jensen in support of local workers and their families who have been forced into strike action for the first time in 35 years over pay and conditions.

BT Group employees, including engineers and call centre workers, held two-day national strike action this week – with picket lines set up across the country including the telephone exchange in Dumbarton.

According to the Communications & Workers Union (CWU), 95.8 per cent of Openreach engineers voted for action and members within BT had a 91.5 per cent majority for the walkout. The strike focuses on BT imposing a pay settlement on employees for £1,500 per annum – a real terms pay cut at a time when BT has posted annual profits of £1.3 billion.

In his letter to the CEO of BT Group, West Dunbartonshire’s MP Docherty-Hughes has urged the company’s senior management to get back round the negotiating table. The MP says local workers deserve a fair pay deal, after being contacted by dozens of BT & Openreach employees who are struggling to get by amidst the cost-of-living crisis.

“Industrial action is never taken lightly but when companies like BT are posting billions in profit workers have every right to fight for fair pay and conditions.

“I’ve been contacted by dozens of BT workers and their families in West Dunbartonshire who are deeply worried about making ends meet amidst the UK’s worsening cost-of-living crisis. They have my full support in pressing Chief Executive Philip Jensen for a fair pay deal.

“These workers deserve a fair pay deal and I urge senior management to return to the negotiating table with an improved offer.”

A copy of Martin’s letter to Philip Jensen, CEO of BT Group, is available here.