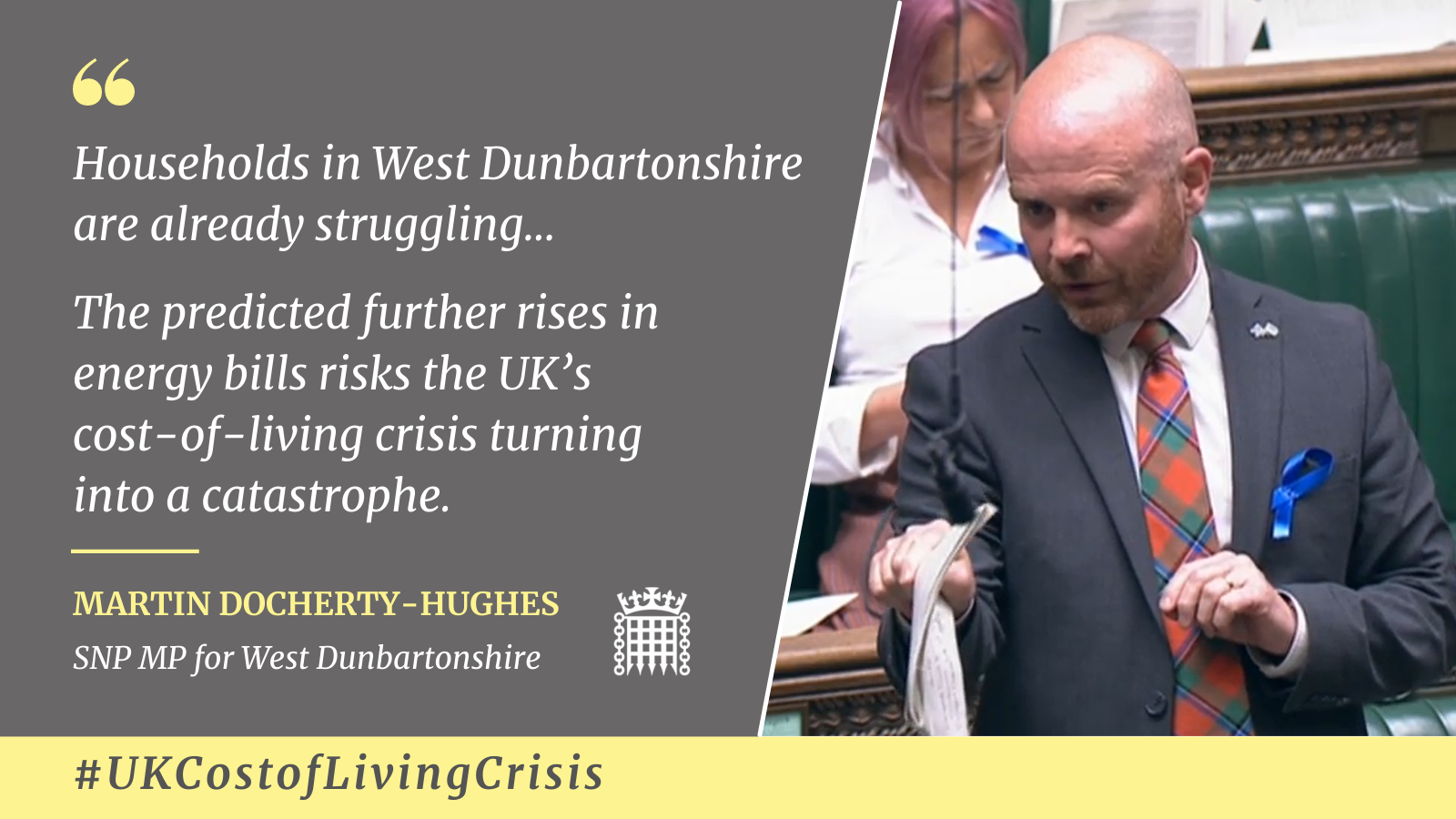 Whilst parliament has been in summer recess, I’ve been hearing from an increasing number of families across West Dunbartonshire worried about soaring prices of food, gas and electricity.

I expect my upcoming advice surgery at St Kessog’s Church in Balloch this week to be busy with constituents seeking help and support. Many households here are already struggling to make ends meet, and the predicted further increases in energy bills means the UK’s cost-of-living crisis risks turning into a catastrophe.

A recent study found that nearly three-quarters of Scottish households could be thrown into fuel poverty within the next six months, as the UK government’s so-called energy price cap is to rise in October and again in January.

With inflation now above 10% – the highest it’s been since the 1980s – and predicted to soar above 18% next year, more and more hard-pressed families in Dumbarton and the Vale are tragically being forced into foodbanks.

In an energy-rich country like Scotland, nobody should have to choose between heating and eating. But that is the grim reality of living under Westminster control and a UK government which holds the levers of power but chooses to sit on its hands.

I’m also speaking with local small businesses who feel abandoned as they face rising unaffordable costs for energy, fuel and materials. There is currently no energy price cap at all in place for businesses, and many SMEs will be forced to close their doors unless the UK government delivers urgent meaningful support.

Yet, in No. 10 we have an absent and redundant Prime Minister who shirks responsibility. And as the Tory leadership contest drags on and on, more people fall into hardship. Whether the Tories pick billionaire banker Rishi Sunak, or wannabe Margaret Thatcher Liz Truss, it’s clear that Westminster isn’t working for Scotland.

I will continue doing all I can to help my constituents across Clydebank, Dumbarton and the Vale. The SNP Scottish Government has committed £3billion of support to tackle the cost-of living-crisis, on top of other measures such as the Scottish Child Payment.

But without the full powers of a normal independent country, we’re at the whim of a Tory government which time and again fails to deliver for our communities. Neighbouring countries show what can be done to help people through a cost-of-living crisis – a true freeze on energy price rises, cuts to VAT on bills, and financial support for the most vulnerable.

We in the SNP are pressing for parliament to be recalled urgently to deliver the meaningful support needed for families and businesses. If the UK government fails to act it shows exactly why Scotland needs independence; so we can escape the callousness of this Westminster government once and for all.