OPINION: RISHI IS RUNNING FEART OF THE VOTERS 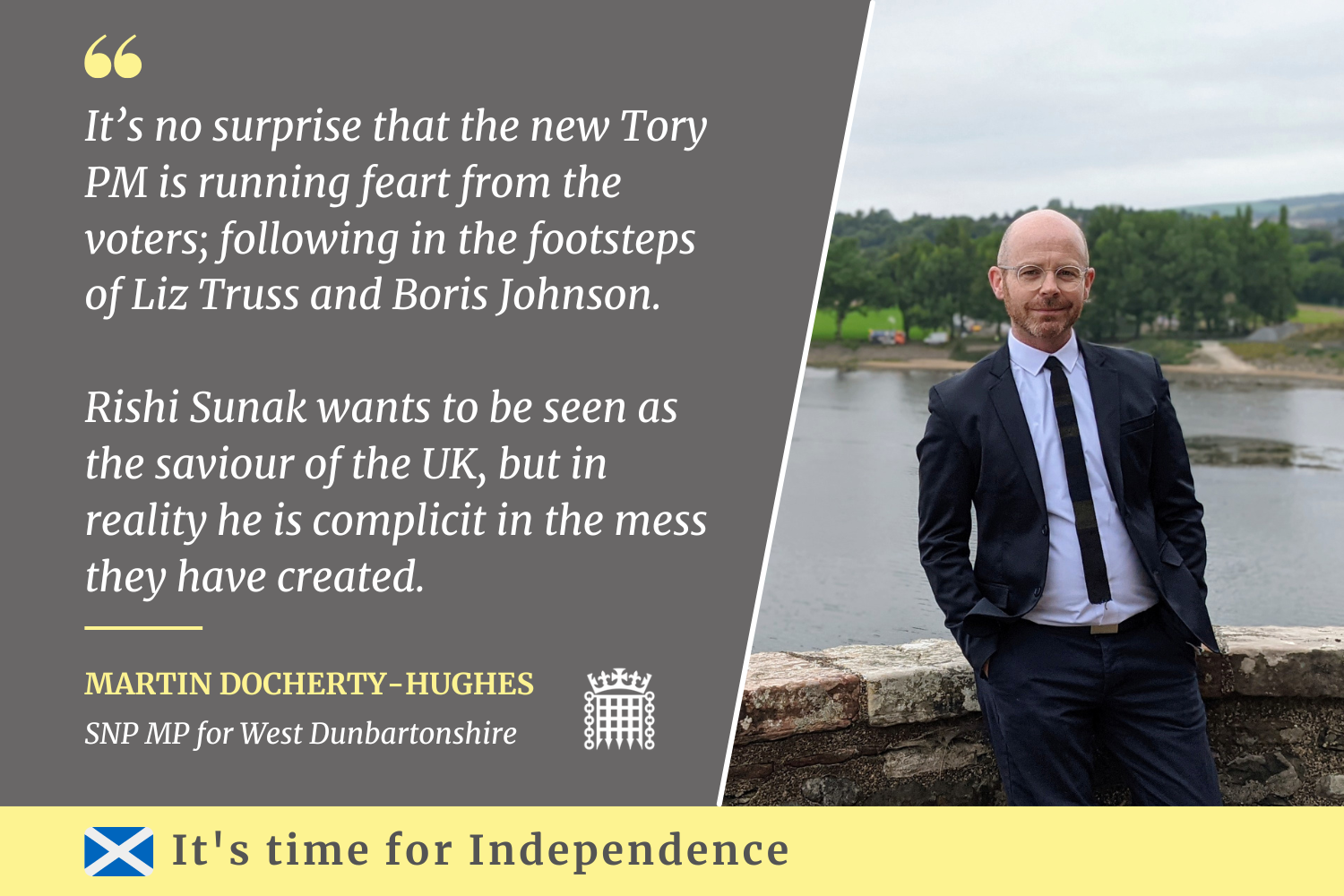 As the Westminster circus rolls on, my inbox has been full of messages from Bankies in despair at the democratic deficit facing our country.

Scotland hasn’t voted Conservative since the 1950s, yet Rishi Sunak is now the fifth different Tory Prime Minister imposed on us in just six years. Despite all that, and the damage done since the Brexit vote of 2016, the Westminster parties still have the brass neck to deny the clear democratic mandate held by Scotland’s Parliament to deliver a fresh independence referendum.

It’s no surprise that the new Tory PM is running feart from the voters; following in the footsteps of the disastrous premierships of Liz Truss and Boris Johnson. The Tories are languishing in the polls after trashing the economy and bringing hardship to families across the country.

PM Sunak wants to be seen as the saviour of the UK, but in reality he is complicit in the mess they have created. As Chancellor, multi-millionaire Sunak backed a damaging hard Brexit and slashed Universal Credit for those on the lowest incomes. He’s voted against free school meals, and even boasted of diverting cash from deprived areas like ours to wealthy parts of England.

As Prime Minister, Sunak has signalled plans for another wave of austerity that will be devastating to living standards and public services. Nobody voted for that, but in Scotland we face paying a heavy price for living under Westminster rule.

As winter approaches, and the UK’s cost of living crisis worsens, how can super-rich Rishi Sunak possibly understand the pressures facing ordinary families in West Dunbartonshire?

Figures from the ONS show the price of food soaring – with everyday essentials like bread, tea and pasta up by close to 50 per cent in the past year alone. As energy bills double, and housing costs spiral, people are being pushed to breaking point.

Here in West Dunbartonshire, local groups like Food for Thought, WD Community Foodshare and Old Kilpatrick Food Parcels are stepping up to help those in need. But the fact that foodbanks are needed at all in a wealthy country likes ours is a damning indictment of Westminster’s failures.

We cannot go on like this. The answer isn’t another out of touch Tory Prime Minister. Nor is it Labour’s Keir Starmer, who backs the Tories on Brexit and says no to Scots deciding their own future.

Only the SNP can be trusted to stand up for the people of Scotland.

And it’s only with independence that we can escape the chaos of Westminster governments we don’t vote for, once and for all.

UK GOVT MUST COMMIT TO RAISING BENEFITS WITH INFLATION