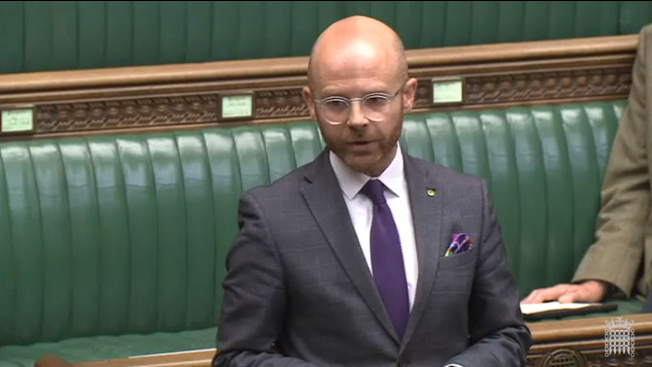 Martin Docherty-Hughes MP has tabled a motion in the House of Commons marking the upcoming 50th anniversary of the 1971-1972 Upper Clyde Shipbuilders (UCS) work-in.

The parliamentary motion recalls the UCS industrial action taken in response to the then Conservative UK government’s attempts to force closure on five Clydeside shipyards including John Brown’s in Clydebank.

Rather than downing tools in strike action as was traditionally done, shop stewards at the yards – including the late Jimmy Reid – took the unprecedented measure of organising a work-in.

By fulfilling the order book, it ensured the viability of the shipyards at the time and demonstrated the skills of the men and women who worked there. In doing so they helped to successfully secure the employment of thousands of Clyde workers who had been threatened with redundancy.

50 years on from the iconic UCS work-in, local SNP MP for West Dunbartonshire Martin Docherty-Hughes says it’s important to pay tribute to all the Clydeside shipyard workers who stood firm in defiance of a hostile Tory government.

“Although I was just a bairn in 1971 when the UCS work-in first began, my father worked at John Brown’s and like so many families whose livelihoods depended on the yards the determination of these workers continues to inspire me today.

“The actions of the Tory government to force closure on the Upper Clyde Shipbuilders were unjust and indefensible. It is testament to the solidarity of the workers, and crucially the communities who backed them, that right won through.

“The eyes of the world were on the Clydeside for what has become a defining part of Scotland’s history. It’s important that we remember and pay tribute to the diligence, dignity, and discipline of all those who stood firm in defence of their right to work.

“50 years on from the success of the UCS work-in, it’s a timely reminder for us all in Scotland that we are not powerless in the face of a Westminster government which treats the needs of our communities with callous disregard.”

Upper Clyde Shipbuilders work-in protest 50th Anniversary – That this House recognises that 2021 marks the 50th anniversary of the beginning of the Upper Clyde Shipbuilders (UCS) work-in protest; notes that when faced with the closure of their shipyards due to the Conservative Government refusing to provide financial assistance, workers at the Upper Clyde Shipbuilders inspired their communities, the length of the River Clyde and wrote their names into the history books by making a stand against this assault on their industry, taking the unprecedented measure of organising a work-in to complete the orders and show the viability of the shipyards and the skills of the men and women who worked in them; believes that the actions of the UCS workers, that were ultimately successful, are a critical reminder that when faced with indefensible actions by central Government the solidarity that exists between workers, their communities and the general population will ensure that right will win through; and understands that there will be a number of events taking place in the Burghs large and small along the River Clyde and across Scotland during 2021 and that these events can be used to inspire the present generation who are faced with the unprecedented challenges of the covid-19 outbreak with the message that workers and their communities in partnership are in a stronger position to overcome the challenges that we presently face.