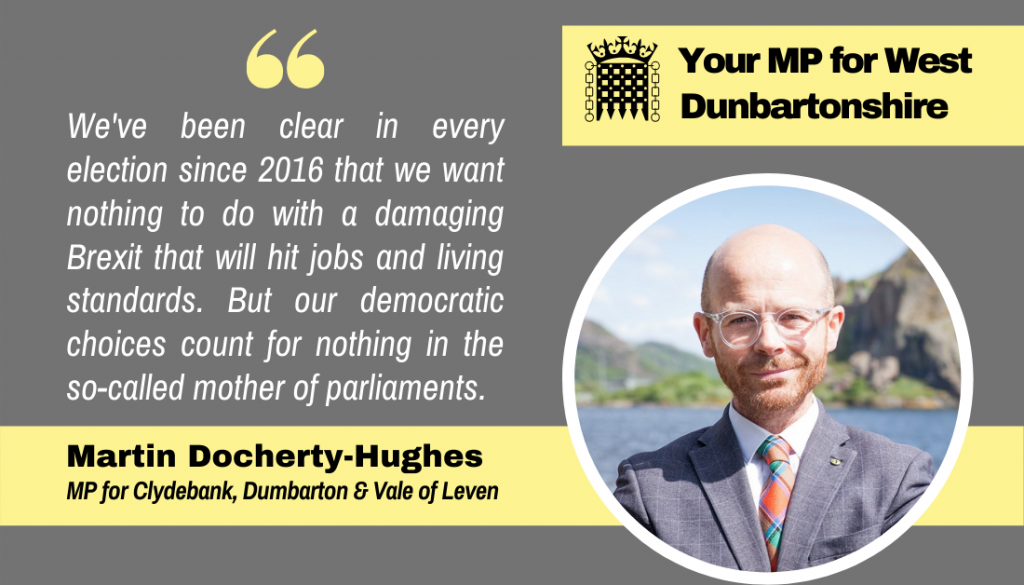 As this is my first column since the snap general election, I’d like to take this opportunity to say a big thank you to everyone who voted across West Dunbartonshire. It’s an immense privilege to be re-elected as your local Member of Parliament.

I’m determined to continue working hard as a strong voice for our communities of Clydebank, Dumbarton and the Vale. Regardless of how you voted, I’m here to help all my constituents. My 8 monthly advice surgeries are now back up and running, so if you need any assistance please get in touch and I’ll do my best to help.

Having fought my third election in just four years, I’m grateful to my supporters and everyone who came out to vote on a cold December night. Sincere thanks too go to every person who volunteered their time on the campaign trail, helping secure another amazing election result for the SNP.

It was a landslide victory for the SNP; winning an increased majority here in West Dunbartonshire and securing 80 per cent of seats across Scotland.

Unfortunately, though, Labour’s collapse south of the border meant Boris Johnson has been able to tighten his grip as Prime Minister. Yet again, here in Scotland we’re stuck with another Tory British government that we didn’t vote for. A Tory government that is now hell bent on tearing Scotland out of the EU against our will on 31st January.

Back in 2016, an overwhelming majority of voters in West Dunbartonshire and every part of Scotland voted to retain our EU membership. We’ve been clear in every election since then that we want nothing to do with a damaging Brexit that will hit jobs and living standards. Our democratic choices count for nothing in the so-called Mother of Parliaments.

The Scottish Parliament, and the Welsh and Northern Irish Assemblies have all voted with one clear voice to refuse consent to our nations being taken out of the EU. Again, Westminster refuses to listen – making a mockery of the claim that the UK is an equal partnership of nations.

By showing such contempt for our devolved legislatures, the UK government has demonstrated clearly that the Westminster system of government is broken. It’s clearer than ever that Scotland must have the right to choose a better future than Brexit Britain under Boris Johnson.

The Tories are running scared of Scotland’s democratic right to self-determination. Though the longer they try to block our clear mandate for a referendum on independence, the more support will grow for the Yes campaign.

I was proud that West Dunbartonshire voted Yes in 2014. Many things have changed since then, but the case for independence has never been stronger.

This article appeared in the Clydebank Post on 29 January 2020.