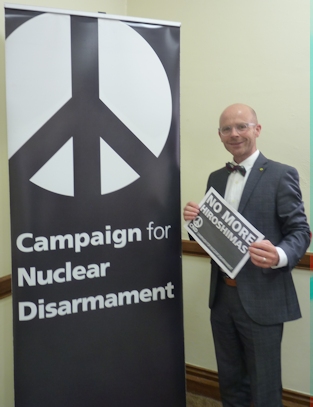 It was a great honour to be able to join the Campaign for Nuclear Disarmament in Parliament to commemorate the 70th anniversary of the bombing of Hiroshima and call for the horrors of the event never to be repeated.

The first use of an atomic bomb against a population took place on August 6 1945 when US air forces dropped a bomb on Hiroshima, which killed up to 180,000 people and destroyed 13 square kilometres of the city. A further bomb was dropped on the city of Nagasaki three days later and killed between 50,000 and 100,000 people.

I have been a long-time supporter of the Campaign for Nuclear Disarmament and as an MP it was a pleasure to have to opportunity to publicly support CND in calling for the horrors of Hiroshima never to be repeated. That these weapons are based so close to home and an area that suffered so badly while friends and families fought to end the mass murder of Hitler’s Nazi regime is an affront to decency. The anniversary of the bombing is an important time to reflect on the human cost of using nuclear weapons.