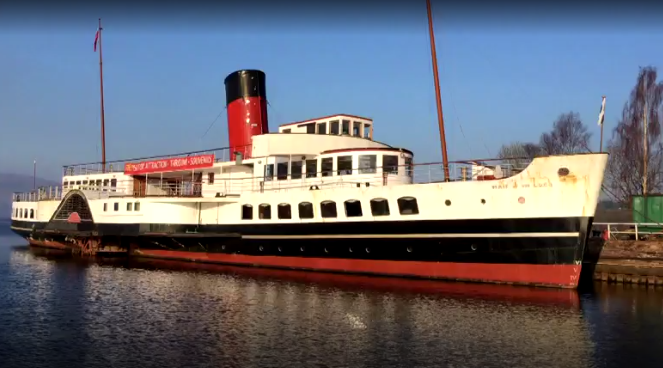 The campaign to get the Maid of the Loch sailing again has received a boost after the award of a £950,000 funding grant from the Scottish Government.

The Scottish Government has made the award through its Regeneration Capital Grant Fund which has been developed in partnership with COSLA and local authorities to support local regeneration projects.

The Maid of the Loch is one of 24 projects across Scotland set to benefit from a share of £26 million from the fund which aims to regenerate local areas, stimulate inclusive growth and create new jobs.

Martin Docherty-Hughes MP has lodged a motion in the House of Commons congratulating the Loch Lomond Steamship Company for securing this latest funding grant from the Scottish Government.

The MP for West Dunbartonshire has also praised the determination of the Maid of the Loch’s staff, volunteers and supporters for their tireless fundraising efforts over the years.

“The Maid of the Loch is an important part of our cultural heritage, and many people have been working very hard for over two decades to restore the ship to her former glory.

“The Scottish Government’s award of a £950,000 grant to support the restoration of this iconic paddle steamer is excellent news for West Dunbartonshire.

“The Maid of the Loch hasn’t sailed since 1981, which is far too long for such a beautiful and much-loved ship to be sitting idle.

“I congratulate everyone involved with the Loch Lomond Steamship Company for their tireless efforts in raising the necessary funds to get the Maid back to being fully operation – something which is a key part of regeneration plans for the local area.

“Like many people in West Dunbartonshire and across Scotland I have very fond memories of the Maid. It’s an exciting prospect that we will soon see this famous paddle steamer sailing once again on Loch Lomond.”

Maid of the Loch Trust – That this House congratulates the Loch Lomond Steamship Company on being awarded £950,000 through the Regeneration Capital Grant Fund, which is in addition to the £3.8 million from the Heritage Lottery Fund, to enable the refurbishment of the Maid of the Loch to proceed; notes that this award is from joint Scottish Government and COSLA investment which supports projects that engage and involve local communities in disadvantaged areas, tackle inequality and support inclusive growth; further notes that, once the regeneration of the Maid of the Loch has taken place it will once again sail on Loch Lomond, offering a new tourism attraction for Scotland; commends everyone involved with the long-running fundraising campaign for its determination and efforts; and wishes the Maid of the Loch and all its supporters every success in the future.