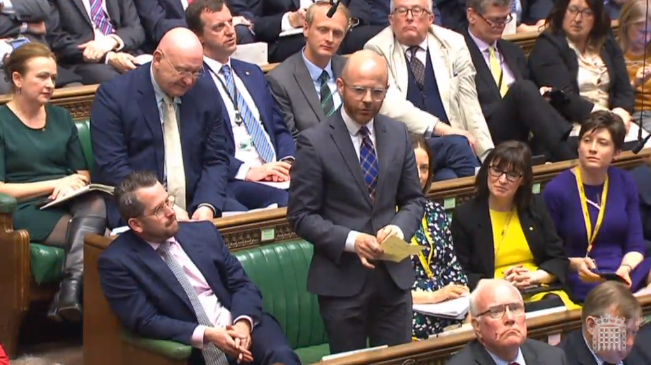 Martin Docherty-Hughes, MP for West Dunbartonshire, has raised concerns with the Prime Minister about the ‘devastating impact’ being caused by the UK government’s rollout of Universal Credit.

During an exchange at Prime Minister’s Questions, the SNP MP challenged Theresa May to ‘get a grip’ and take action to protect further families from being forced into crisis as a result of the Tories’ flagship welfare policy.

The move follows warnings by welfare agencies that Universal Credit is set to impact up to 13,200 people in West Dunbartonshire when the new benefit is fully implemented in local job centres later this year.

Figures released last week by the Trussell Trust highlighted the hardship facing families as it was revealed that foodbank use has rocketed in areas where Universal Credit has been introduced.

Local employment support group Working4U also warned that advice agencies will struggle to provide the support needed to prevent the most vulnerable residents from being negatively impacted by the new benefit.

Martin Docherty-Hughes MP warned the PM not to bury her head in the sand, drawing parallels between the Tories’ cruel welfare policy and the UK government’s complacent and callous treatment of the Windrush Generation.

“With less than 6 months to go until the full rollout of Universal Credit in West Dunbartonshire local welfare agencies are right to raise concerns about how it will impact local residents.

“The evidence of the damage being caused by the Tory government’s flagship welfare policy is clear for all to see. Research shows that foodbank use has risen by 52% in areas where Universal Credit has been implemented – four times higher than the increase in parts of the country where it has yet to be rolled out.

“The Windrush families have had to pay a heavy price for the Prime Minister’s callous complacency. That same cruel treatment of British citizens is evident as families across the UK are being forced into further financial hardship as a result of the Tories’ welfare policies.