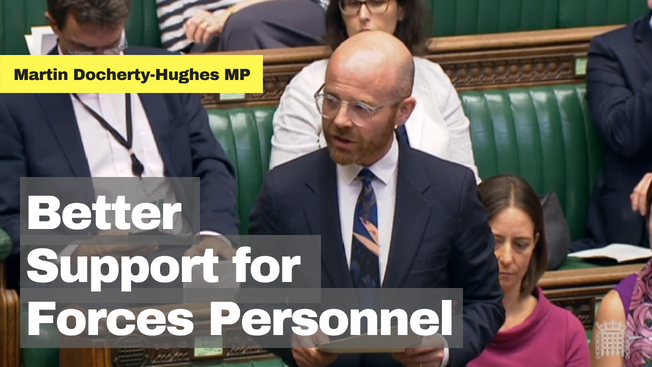 Coming from an Armed Forces family – where three generations, including my father, brother and now nephew have served – I recognise the importance of paying tribute to the contribution and sacrifice of our forces personnel past and present.

It’s always a privilege to attend local events as the Member of Parliament for West Dunbartonshire, and I was delighted to be part of this year’s Armed Forces Day parade in Clydebank.

The procession from Three Queens Square to the Town Hall had a great turnout of support from residents, with attendance from veterans who have served in Northern Ireland, Iraq and Afghanistan.

It’s great to see Armed Forces Day return to West Dunbartonshire after last year’s parade had to be cancelled amidst concerns about a lack of available military personnel to deliver the event. It’s an issue I raised with the UK Defence Secretary last year, who was at pains to assure me about the importance of these local events to the armed forces.

As Scotland’s sole representative on the Commons Defence Select Committee, I meet regularly with service personnel, veterans, military charities and support groups. Whilst the UK government is desperate to give the impression of how much it values our Armed Forces, the reality is that morale amongst service personnel is steadily decreasing and numbers are at their lowest for decades.

A recently published survey of Forces personnel makes worrying reading, with just a third of personnel reporting that they feel valued by the Service and even fewer saying they have confidence in the abilities of leadership to resolve issues.

It’s clear that after years of cuts to the Defence budget by the UK government our Forces personnel are at a low ebb – with significant concerns over issues such as pay, housing and leave entitlement.

It’s for this reason that I have introduced a Bill at Westminster to establish a statutory representative body that can help secure better working conditions for UK service personnel.

The Bill would seek to create a body – similar to Police Federations – that would represent serving personnel as employees, advocate for improvements in pay and conditions, offer support in personal matters, and make representations to the chain of command – although crucially, just like the Police Federation, this would not allow strike action.

Even at this early stage, it’s no surprise to see the Tories oppose my Bill – but if the UK government really does value the wellbeing of Forces personnel then it should take this proposal seriously. I look forward to bringing the Bill back to parliament later this year and will continue to press the UK government on behalf of veterans, service personnel and their families.

This column appeared in the Clydebank Post on Wednesday 4th July 2018.