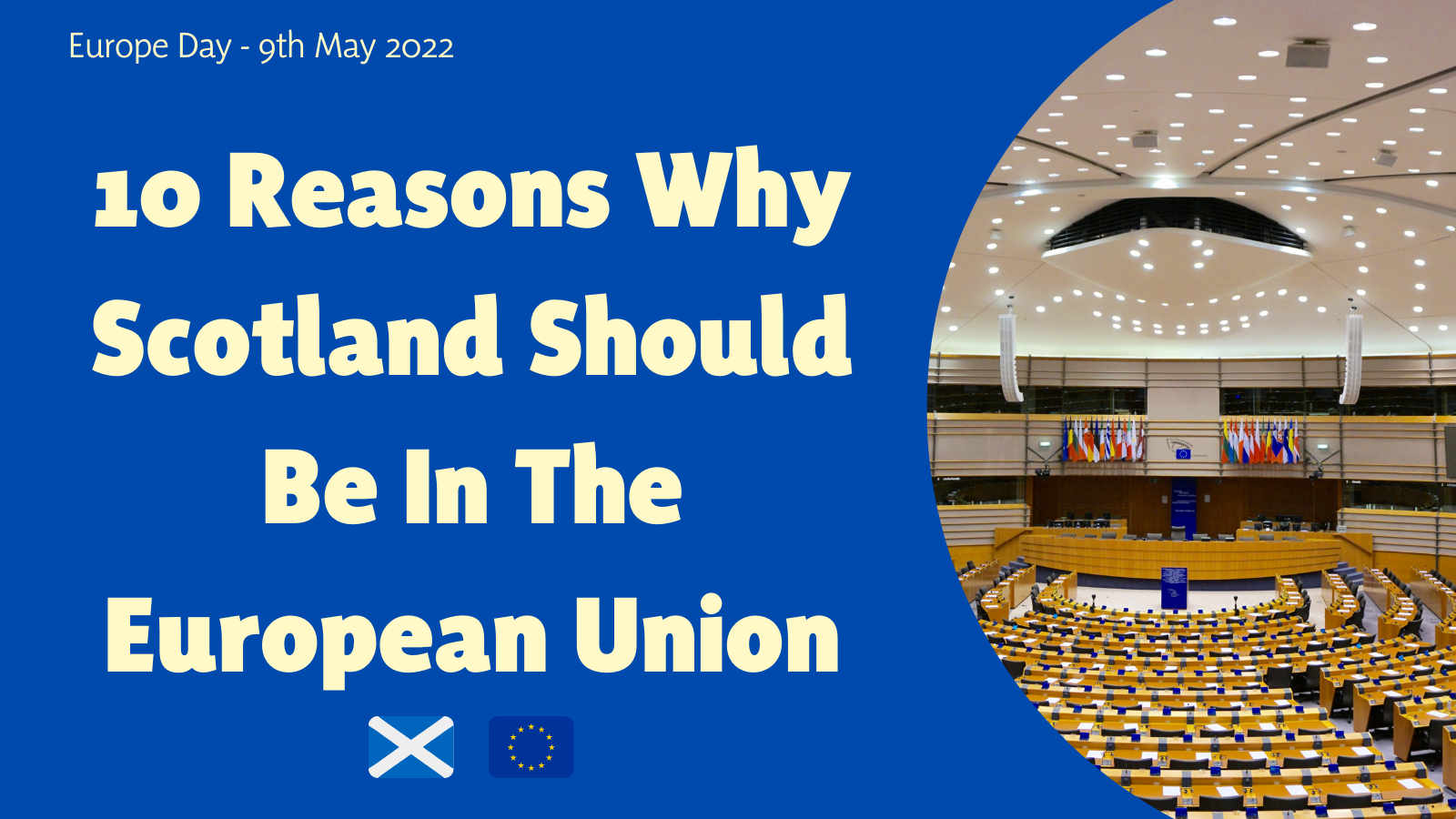 Today we celebrate Europe Day, and restate the SNP’s commitment to an independent Scotland becoming an EU Member State. Here are 10 Reasons Why Scotland Should Be In The EU:

1. SOLIDARITY WITH A GLOBAL A-TEAM

The threats facing our societies are global, and the EU leads progressive global action to solve shared challenges. An independent Scotland in the EU would be far stronger than a post-Brexit UK urgently scrambling for bilateral agreements.

2. EQUALITY WITH ALL EU STATES

Brexit has left the UK more isolated than ever. An independent Scotland would be equal in the EU and seek to be a progressive voice and role model within the EU and internationally – promoting greater consensus, equality, and respect.

3. RESTORATION OF FREEDOM OF MOVEMENT

By re-joining the EU, Scots would be able to travel, live, work, and study in any other EU/EEA country, without visa red tape or bureaucracy, and Scots businesses could hire the overseas talent they need.

Scottish voters rejected Brexit but the UK Government has pursued an economically damaging Brexit which will reduce the UK’s GDP by 4% – twice the impact of the COVID-19 pandemic. Only Scotland rejoining the EU can undo this harm.

The Free Trade Agreements proposed by the UK Government will not come close to making up for the loss of EU trade post-Brexit. By re-joining the Single Market and Customs Union, Scotland would re-open its economy and exporters to EU-states.

Common EU standards allow individuals and businesses to shop freely in other EU Member States without bureaucracy, tariffs, or border checks (unlike the Tories’ Brexit trade barriers). An independent Scotland would uphold these EU standards.

Renewables are needed to tackle the global climate crisis as well as help Europe move from dependency on Russian oil and gas. Scottish renewables can help Europe pivot away from Kremlin-controlled energy sources, and bolster the EU’s climate and geo-strategic security.

For centuries, Scotland has punched above its weight in producing world-class research and innovation. As part of the EU – with funding programmes such as Horizon – Scotland can do even more to bolster European research and solve collective issues.

Scotland will take a different approach to the UK when it comes to helping the world’s poorest and most vulnerable. Scotland would benefit from working with European partners in dealing with e.g. climate change, post-COVID recovery, and poverty.

The EU aims to achieve a ‘level playing field’ by prioritising social rights for workers and people in general. By joining a bloc that safeguards fundamental rights, an independent Scotland would ensure the wellbeing of workers both at home and across Europe.

Grateful to SNP Spokesperson for Europe, Dr Philippa Whitford MP, for continuing work to articulate the benefits of an indpendent Scotland rejoining as an EU member state.