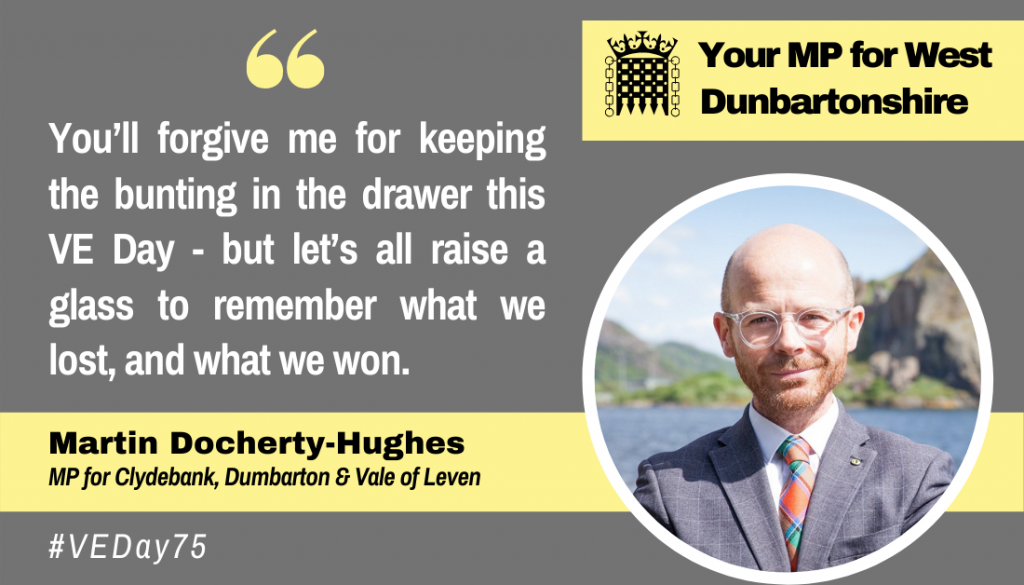 On the 75th anniversary of VE Day it’s right that we pay tribute to those who sacrificed so much during WWII; but it’s important not to let extremists on all sides hijack what should be a moment for all Scots to commemorate the defeat of fascism.

I can’t have been the only one who had to resist the urge to throw things at the telly when I saw the pictures of Nigel Farage joining in with the now weekly clap for the NHS last Thursday – another indication of how the right attempts to get its tentacles into anything pure, and it’s a playbook they’ve deftly used to turn any sort of Second World War commemoration into a schmalzy parade of British exceptionalism and casual racism against our European friends.

The most galling part of it is that it also seeks to overlook the incredible story of common endeavour not just by people across these islands, but by Europeans and other allied forces of the British Empire, including from now independent states like Canada, India, Australia and New Zealand.

As the MP for West Dunbartonshire, and a Bankie born and bred, it’s maybe no surprise that we still appreciate the need today to cheer very loudly the defeat of Adolf Hitler: no place in Scotland suffered as much during the war, or indeed gave as much in its victory.

The shipyards of John Browns, the ordinance factories in Dalmuir and the Singer factory had done so much for the war effort that they soon came to be targeted as critical national infrastructure by the Luftwaffe: and so came to pass on the 13th and 14th of March 1941, the nights which have defined the history of the town.

On that first night, the Luftwaffe bombardment lasted a whole 9 hours: a precision attack which began over the western village of Old Kilpatrick, where high explosive bombs set the Admiralty Oil Storage facility ablaze, before continuing as far as the whisky bonds of Yoker. As the town burned, hundreds of Nazi bombers swarmed so low that people in Parkhall spoke of being able to see pilots and rear gunners faces.

After the horrors inflicted from the air over these two nights, 1,200 eventually perished: but the nightmare had only just begun for 40,000 other souls. They marched to Dumbarton and the Vale of Leven, and to refuge between the Clyde and the banks of Loch Lomond. They marched towards mother Glasgow, Lanarkshire and Renfrewshire. They sought shelter and refuge in the arms of strangers, in places from which many would not return.

Among these refugees from the Blitz were my late Mum Eleanor and my 86 year old Dad Paddy, – and it is their experience, similar to experiences which will have been passed on by so many other Bankies, which is why securing the first debate in the House of Commons on the subject in 2016 is probably still my proudest moment as an MP.

Because the lessons of the Clydebank Blitz tell us a lot about why we need to commemorate VE Day: it failed to destroy the morale of the people of Clydebank, and allowed the town to continue its contributions to the eventual success of the Allied effort. It is therefore vital that we remember the fruits of that suffering: lasting peace in Europe; the NHS; the welfare state, and the largest social housing programme ever undertaken that rebuilt Clydebank and the rest of Scotland.

Yet incredibly, it is the same UK Government that has done so much to denigrate that post war dividend that is now using this struggle of millions to put a patriotic sheen over its own man-made disasters, from its handling of Covid-19 to no deal Brexit, cheered on as ever by a pliant right wing press that – in the case of the Daily Mail – literally cheered for fascists in the 1930s.

So you’ll forgive me for keeping the bunting in the drawer – and I might swap you Glen Miller for Vera Lynn – but let’s all raise a glass to remember what we lost, and what we won.

This article was written for publication in The National newspaper on the 75th anniversary of VE Day.