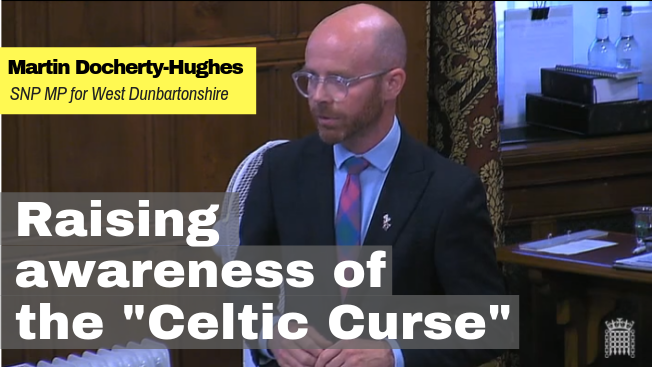 SNP MP Martin Docherty-Hughes is seeking to raise awareness of an illness known as the “Celtic Curse” which is thought to affect 1 in 8 people across Scotland.

Genetic condition Haemochromatosis is a disorder which causes the body to absorb too much iron and can lead to serious health issues if left untreated including cancer, arthritis, chronic fatigue and damage to the heart and liver.

The condition is known as the “Celtic Curse” because it is the most common genetic condition in people of Northern European Celtic origin, and is particularly prominent in Scotland and Ireland.

Speaking in the House of Commons, MP for West Dunbartonshire Martin Docherty-Hughes outlined the experiences of his constituent Davie McAleer from Clydebank who was diagnosed with heredity Haemochromatosis along with his mother, brother and other family members.

The local MP, who is a member of the newly formed All Party Parliamentary Group (APPG) for genetic Haemochromatosis, said that the condition is still relatively unknown and early diagnosis is key to ensuring that people affected can live normal lives.

Anyone affected by associated symptoms such as joint pain, fatigue and loss of sex drive is advised to speak with their doctor. Genetic Haemochromatosis can be difficult to spot but diagnosis and treatment is relatively straightforward following a routine blood test.

“Research shows that Haemochromatosis is the most common genetic disorder in the UK, but it can be difficult to spot because most people have never heard of it and the symptoms of iron overload are often overlooked.

“An estimated 350 people in West Dunbartonshire are affected by the condition known as the “Celtic Curse”, but that number is likely to be much higher due to the number of families here from Irish descent.

“Early diagnosis is key to treating Haemochromatosis and its long-term impact on other areas of healthcare provision – I know that first hand because I have close family members affected by the condition.

“The evidence we’ve heard in parliament suggests that a lot more can be done to better educate the public and medical professionals about this still relatively unknown genetic disorder.

“I would urge my constituents and people across Scotland to go and talk to their doctor if affected by these symptoms including joint pain, fatigue and loss of sex drive. Getting diagnosed early will help greatly in managing the condition and may just save your life.”