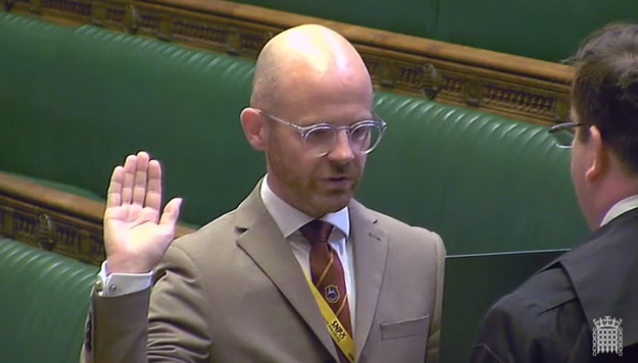 The SNP’s Martin Docherty-Hughes has been sworn-in as the Member of Parliament for West Dunbartonshire.

Following his re-election at the General Election on 8 June, Martin has re-dedicated himself to serving the people of Clydebank, Dumbarton and the Vale of Leven.

During the swearing-in ceremony, Martin continued his tradition of promoting West Dunbartonshire schools in parliament by wearing a school tie from Braehead Primary in Dumbarton.

“It is an honour and a privilege to have been re-elected as MP for West Dunbartonshire. I am hugely grateful to the voters for placing their trust in me once again.

“Over the past two years I have worked hard to represent our local communities in parliament. I am determined to continue representing the people of Clydebank, Dumbarton and the Vale of Leven to the very best of my ability.

“I am very fortunate to have been supported by a wonderful team of supporters and activists. We ran a positive campaign and every single person who volunteered their time during the election has my heartfelt thanks and appreciation.

“I re-dedicate myself to serving the people of West Dunbartonshire and will work tirelessly to ensure they have a strong voice in Westminster. I will not let you down.

“My ambition is to be the most accessible MP that West Dunbartonshire has ever had. I am here to represent all of my constituents regardless of how you voted in this election.

“I would encourage anyone with any issues they’d like to discuss to get in touch via email to martin.docherty.mp@parliament.uk or by calling my constituency office on 0141 952 2988.”