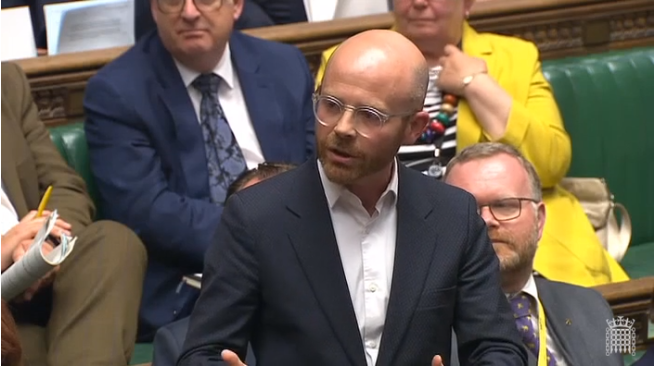 Martin Docherty-Hughes, MP for West Dunbartonshire, has slammed the Tory UK government for breaking another election promise, after it was revealed that the BBC will end blanket free TV licences for pensioners aged over-75.

At the 2017 General Election the Tory manifesto promised to “maintain pensioner benefits, including free bus passes, eye tests, prescriptions and TV licences”, for the duration of this parliament.

However, the BBC has announced that from 2020 only those aged 75 and over and in receipt of Pension Credit will be entitled to a free TV licence – meaning an estimated 328,000 Scottish pensioners will now have to pay £154.50 per year or face a fine of £1,000.

Local SNP MP Martin Docherty-Hughes warned that the move would hit thousands of struggling pensioners in West Dunbartonshire, and has backed calls by charity Age Scotland for the UK government to keep its promise and ensure the free TV licence entitlement is fully funded.

A petition calling on the UK government to reverse its decision has received over 145,000 signatures across the UK.

“The Tories promised at the last election that they would protect free TV licences for the over-75s, but yet again we see that the UK government cannot be trusted to deliver for Scotland’s pensioners.

“Not content with presiding over the lowest state pension of any developed country, and denying women born in the 1950s pension justice, this move by the UK government will also now force thousands of older people across West Dunbartonshire further into financial difficulty.

“Having access to television is a lifeline for many older people, especially those struggling with loneliness and isolation and who rely on TV to stay connected. But as ever it’s the poorest and most vulnerable in our communities paying the price of Westminster austerity.

“The SNP are fully opposed to these proposals and will press the new Prime Minister, whoever that may be, to reverse this broken promise and fully fund the TV licence for our older people.”

“This is a kick in the teeth to the thousands of older people who are already struggling to stay on top of rising living costs. If this goes ahead then we will see lonely and vulnerable people in their 80s and 90s, who depend on their TV for company, forced to give it up.

“Forty per cent of Scottish older people who are eligible for Pension Credit do not claim it, and will now face yet another annual bill that they can’t afford. We know that this is causing a huge amount of distress and anxiety among our poorest pensioners.

“The UK Government must not renege on its manifesto promise to older people and continue to fund this entitlement for all of our over-75s.”